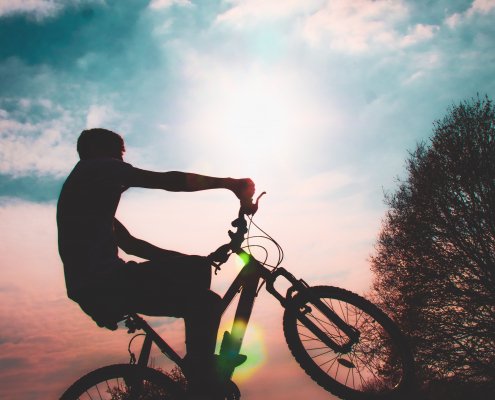 As a leader, I bet you already know a thing or two about resistance.

It can be a new strategy, a new board policy, changing market conditions or even a new person on your team.

Everything slows down or, worse yet, comes to a screeching halt.

In physics, this is known as “Rolling Friction.”

In rough terrain, a mountain bike with fat knobby tires encounters much more rolling resistance than a racing bike with skinny tires on a paved surface.

My truck gets much worse fuel mileage when I’m on a steep incline hauling a heavy load. But, conversely, it sips fuel and goes like stink on a straight-away with no load.

Why? Because there is less rolling friction. This frees the truck to move with greater ease.

The next time a big rig goes flying by you on the highway, this is something to think about.

The dynamics of rolling friction can be just as easily applied in business leadership and life.

“You can’t make an omelette without cracking a few eggs.”

As a leader, you can’t change things without upsetting a few people.

After all, a core leadership function is bringing about change.

Resistance is only natural. It’s human nature to resist change.

Bottom line up front! There is no way to make people like change.

You can only make them feel less threatened by it.

From experience, I find it best to just assume resistance exists. It may not manifest immediately.

There can be “issue” resistance that might require people to change a pattern or learn something new.

It’s entirely predictable and typical to come up against a wide range of intense emotions around a proposed change.

Somebody for sure will feel that their authority is being threatened or questioned. Someone might think that personal or professional freedom is being lost.

Rolling With Resistance – What Doesn’t Work

Stressing the urgency of making a change or highlighting benefits can be equally ineffective.

Arguing or pushing back – forget it.

Rolling With Resistance – What Does Work

Listen intently to understand any barriers or fears the other party is expressing.

Empathize with the concern and explore in a non-judgemental way.

Revisit the agreed-upon goals that brought you together in the first place.

Present the possibility that goals and attitudes don’t mesh with agreed-upon goals.

Identify the gap between “where we are now” and “where we want to be.”

People will only commit to a change if there’s a degree of readiness on their part.

Sometimes it just takes a bit of patience for others to pick up what you’re laying down.

Don’t be afraid to kindly say your piece, and then let silence do the heavy lifting.

Does it always work? No guarantees.

It will get you a bit down the road together in a way that’s better informed.